HOME OF THE GRIFFINS 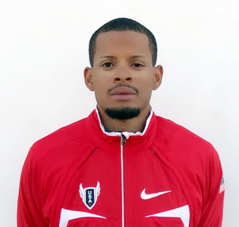 Coach Jones has been recognized as a Track and Field Sprints Coach since 2015. Interestingly enough, Coach Jones started his coaching career with college athletes.

His first coaching position was at Santa Ana College. He was the Sprints Coach and Cross Country Coach. At the community college level, one of Coach Jones’ athletes concluded her season as a top-three female athlete of All Time in the Santa Ana College Record Book as a 400-meter hurdler. In addition, the women’s sprinter team posted faster times that had not been seen since 2005.

Coach Jones began his first high school coaching position in 2015-2016 at Marina High. At Marina, Coach Jones’ athletes broke school records, 15 athletes made it to CIF, seven qualified for CIF finals, and had a 5th place finish with the 4 x 1 relay at CIF finals. These athletes became league champions for the Sunset League. These kinds of accomplishments by athletes had not been seen at Marina High School since the late ’80s.

At Los Alamitos High School Track and Field since 2017, Coach Jones’ athletes have broken school records. He coached an Indoor Champion for the 600 meters and put together the SMR Team that won the Arcadia Night Invitational Section in 2018. Moreover, Coach Jones has coached league champions, has helped students achieve CIF, Masters and State Track Meet.

As a multi-athlete, Coach Jones played football, basketball and ran track and field. Throughout high school and college, he was a recognized football, basketball and track athlete. Coach Jones still holds numerous records in the community college and university level. Some of these records still stand to this day. In 2015, Coach Jones was the USA Track and Field National Club Champion in the 200 meters. In the summer of 2016, he ran 20.4 in the 200-meter race. This race qualified him to compete at the 2016 USA Olympic Trials in Eugene, Oregon. In 2017, Coach Jones competed in the USA Outdoor Championship in Sacramento, California. This summer, Coach Jones became an athlete of the USA National Track and Field Team.

Jones completed an Associate’s Degree in Accounting from Goldenwest Community College, a Bachelor’s Degree in Business Administration with Sports Emphasis from Bristol University, and a Masters Degree in Education from North Central University.